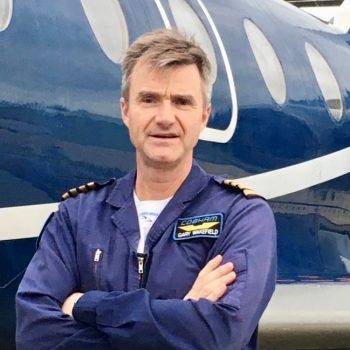 A former Naval Officer and Fleet Air Arm pilot, Gary Wakefield served in the Royal Navy for 21 years. Gary Wakefield was fortunate enough to fly and lead all over the world with an exchange tour to the Royal New Zealand Navy and a tour as a Qualified Helicopter Instructor. Following two years on the staff of Britannia Royal Naval College as the Head of Leadership Training he studied for a Masters Degree in Defence Studies at the Joint Staff College part of Kings College London.

On leaving the RN Gary Wakefield trained as a Fixed Wing Commercial Pilot and have flown for the past 17 years for a British aerospace company providing Operational Readiness Training to the RN and RAF. During this second career, he has been promoted to Captain, trained as a Training Captain and served as the Flight Safety Manager for 4 years. He has facilitated CRM training for his entire career and am currently the CRM Trainer Examiner and CRM Manager for the Company.

In his spare time, he keeps fit. He is a keen road rider and a fanatical Laser sailor. He also have the privilege to serve as Rear Commodore for one of the largest yacht clubs in the British Isles.

Gary Wakefield lives in Dorset with his wife and son, and his daughter living away from home at university.